It has been over four years since I exhibited my favorite piece of work, Approach/Recession(2012), as part of the Brighton Photo Fringe, at the Foundry gallery, Lewes, East Sussex.

In the process of creating my new website, I have been become reacquainted with the work and reminiscent of the overwhelmingly positive response it was met with.

Perhaps the visual rhythm of rapid pulsation stuck viewers in a state of awe. Many queries arose as to how the visual effect of projection adhering to glass was achieved.

My aim was to invoke in the viewer a stillness of mind obscured by preoccupation with the everyday. By referencing astronomy like moving image motifs,  that are seemingly hard to define, I hoped to stimulate a meditation on the theme of eternity.

What is the nature of the light that seems to animate our shared consciousness aliveness?

What is the fundamental quality of this light at its essence?

Does this light recede at the time of death?

Can this medium of moving image installation be an effective means to address themes such as these as opposed to the textual forms?

Can this medium of still moving image installation be a tool of spiritual contemplation and aid a path to awakening?

A work in progress 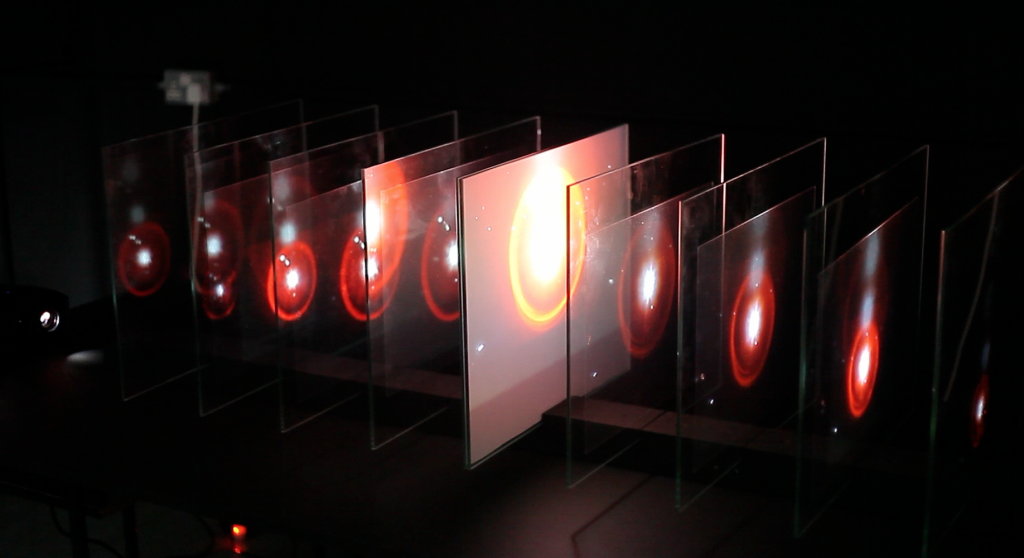 Through experimentation, I found that using a zoom lens created a circular aberration when filming the sun as reflected on water.

In post production, the background exposure was darkened and the footage reduced in speed. A circular aperture mask was progressively applied, reducing the visuals to a white point.

Two projectors using the same source visuals on a loop were synchronized and angled up upwards, meeting at a central point in the middle pane of glass. Projections were caught on sheets of plastic acetate, adhered to planes of glass, increasing in size in their journey outwards from the projector lens.

My aim has always been to expand, develop and further exhibit this work. The work needs a darkened space in which to be situated a work. A custom dark space had to be constructed with the wider gallery space. To replicate this in a new exhibition space could be challenging.

I would like this work to be accessible outside of the gallery space also, by means of higher-quality video capture, edit and distribution via video sharing sites. A series of smaller works orientated around new themes could be a playful approach.